How Nervous CEOs Sell Charisma on CameraTaming Your Inner Critic: Improving Yourself On-CameraAuthenticity Expert Vern Oakley Urges Corporate Leaders to ‘Get Real’ with StakeholdersLeveraging Video in Times of CrisisThe Intangible Elements of an Effective Video

One of the most wonderful aspects of film is that it is such a compelling medium for persuasive stories. The right expert interviews combined with incredible b-roll visuals can change anyone’s mind. This is why climate change-focused documentaries like Seaspiracy and I Am Greta are on the rise.

As filmmakers, we have the responsibility to tell these important stories in a socially-conscious way. But we also have to create these films according to those same values. So, what do we do about the surprisingly large carbon footprint of the film industry? 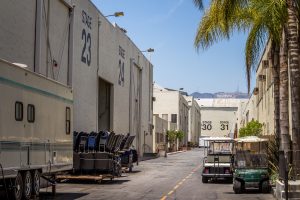 The numbers have already been crunched. The UK’s BFI and BAFTA published a report on the sustainability status of the US and UK film industries. They found that a film with a budget of $70 million generates the equivalent of 2,840 metric tons of carbon dioxide. That’s equivalent to the CO2 emissions from the energy used to power 328 homes for a year, or from 614 passenger vehicles driven for one year. And it would take around 3,700 acres of forests one year to undo this. Now think about how harmful the largest blockbuster films can be, which can cost $300 million or more.

That’s on top of waste created by transportation, sets and props, costumes, and unsustainable equipment. So, how can we fix our harmful behavior?

The Solutions: Greener and Renewable-Energy Sets

As the world faces environmental concerns, each industry must pivot according to their own rules. Luckily, there are organizations working hard to reset the green imbalance.

New York-based company Earth Angel encourages productions to save money while switching to eco-friendly practices. Founder Emellie O’Brien has worked on the sets of commercials, TV shows, and feature films like Black Panther. She opts for eco-friendly products, reduces waste, and donates meals and materials to charity—all while saving money. And Shattered Prism provides green, silent e-generators and power tools for productions. They’re less dependent on New York City’s coal-fueled power grid and instead use solar power to charge their generators.

Tribe has made several films that outline shifts toward sustainability. One of our favorites is a video we made with Hess, where we demonstrate the process of decommissioning fishing wells to reduce ocean pollution and to recycle their existing materials. Hess employees explain the balance of risk management and environmental responsibility.

ESG is a Mandatory Responsibility

Like corporations, film productions have to consider their impact on the community around them. This includes the people and the land. Ensure your film crews are following the guidelines of ESG (environmental, social, and corporate governance) and do your part to keep this earth greener than we found it.