Why Your Company Needs to Invest in Employee CommunicationsWhy CEOs should steal techniques from actorsCEO Magazine Profiles Author, Filmmaker and Authenticity Expert Vern OakleyExecutives Speaking on Camera, Beware of Media TrainingDig Into the Heart of Your Business Story

I’ve met hundreds of CEOs and leaders in my career, and most of them are dynamic type-A people. They have no problem standing in front of a crowd and delivering a captivating speech. But that inspiring persona somehow evaporates the minute you put a camera lens near them. Why?

You’re relying on the wrong strategy to maintain control

It has something to do with control. A CEO is The Boss. The Big Kahuna. They’re used to being in charge. And then they get on a film set with a director, a producer, and some assistants, and all of a sudden all eyes are trained on them in a strange situation.

So what do they do? They fall back on one trusty tool—media training. But that’s exactly the wrong response, because while media training prepares you for some specific situations, it can suck all the authenticity out of you and leave nothing but a corporate talking head. It teaches people to pivot, to avoid, to squirm, and to dodge.

What happens in media training is the total opposite of what it takes to be you on camera. Viewers don’t want a polished sound bite machine. They want a real human.

You believe the director is trying to trick you 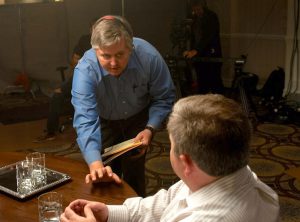 Media training has its place, of course. It can keep you from looking foolish when a smug reporter asks you a gotcha question. But that’s live TV.

You don’t need to lean on the defense mechanisms that media training may have engrained in you. You’re not on live TV trying to dodge probing questions. You have complete control over your message, and nobody will see the video until you’re completely happy with it.

You’re focusing on the performance rather than the message

This video is an excellent example of how trusting leaders can let go of media training on camera. When Vince Forlenza had reached his first year as CEO of BD, we created a video to celebrate his leadership in the role. We weren’t trying to box him into a corner with our questions, but rather enhance his message to his company. His warmth and openness is an invitation for employees to get to know him better and receive his CEO message.

Related Posts: How Nervous CEOs Sell Charisma on Camera Taming Your Inner Critic: Improving Yourself On-Camera Leveraging Video in Times of Crisis The Intangible Elements of an Effective Video
Tagged: